This week, we are reading...THE HUNGER GAMES by Suzanne Collins 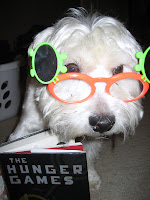 Okay, so I actually read this awhile back in preparation for a writing retreat, but as I was reflecting on this title today, I had a new thought that is perhaps worth sharing. When I discuss THE HUNGER GAMES with adults or children, several issues inevitably present themselves. How far does loyalty to friends and family extend? Would you be willing to kill another to save your own life? Would you sacrifice yourself to defeat an oppressive state? Who can you trust? Should you pretend to love someone to save yourself? In crisis after crisis, Catniss must decide whether to fight or hide, trust or defend. Each chapter contains its own moral dilemma which must be resolved or pursued into the next chapter. The intensity of these quandaries makes for a driving plot with very high stakes, which is likely a large part of the book’s success. The novel is a sort of fictional “Survivor” where the prize is not merely money but life.

However, as I strive to understand the remarkable strength and completeness of this book, I have begun to study another motif. I believe the author is suggesting it to us in the book’s very title: HUNGER. The search for, choice, taste and experience of food carries readers through numerous discrete, though highly interrelated, dilemmas which Catniss encounters.

Food also connects readers to each character in different ways. Peeta is always, first, the boy who tossed hungry Cat some bread. Cat relates to various denizens of District 12 in terms of what types of meat they will buy from her. Haymitch is a drunkard, an over-consumer, Faustian and therefore suspect. In the capitol, Cat gorges on many carefully described feasts—the game-makers' attempts to fatten the tributes to make the battles more exciting or a kind of extended last supper? Before her death, Rue salves Cat’s tracker jacker stings with leaves she has chewed and spat out, an act of eating. To defy the state, to drive home the heinous insanity of the games themselves, Cat and Peeta threaten to consume poison berries.

Suzanne Collin’s plotting is superb, however I think that the artistry that raises this book far above the standard thriller is the layering on of deep, reverberant hunger images. As a writer and reader, I cannot help but be astounded that it took me weeks after my initial reading for this realization to surface. This is because it is so organically, artfully woven into the story that it becomes, like a human skeleton, the unseen yet essential frame upon which the flashier, more dynamic elements of the story are hung.

Yet, in the end, I understand Cat not because she is in an almost unimaginably extreme competition, but because she is hungry: for food, for companionship, for justice.
Posted by Stasia at 7:05 PM

Funny, I've been pondering the varied uses of fire as symbolism in book 2, CATCHING FIRE, but hadn't even caught the hunger theme in HUNGER GAMES. You are so right, though! When writing something like this, it feels heavy handed and obvious to so consistently use a symbol, metaphor, or theme throughout, but if done well, it obviously blends into the architecture to present a unified, compelling design. Thanks, Stasia!