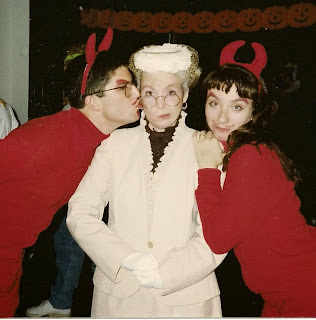 Hubs, dear friend and me. Halloween circa 1993. Scary enough for ya?
Posted by Stasia at 4:06 AM 0 comments

I don’t write POETRY either

I don’t think I’ll ever forget the writing conference I attended (quite a few years back now) where an editor read aloud a page of my work then made a rather sharp comment about being “careful about the difference between poetry and split line prose.” Truth? It gutted me. I went back to my work and tried to figure out a way to weed out the split line prose. I reviewed my favorite poetry collections…checked all the poems magnetized to my refrigerator…reread favorite verse novels by Sharon Creech, Jacqueline Woodson, Sonya Sones, Ellen Hopkins, Caroline Starr Rose, Guadalupe Garcia McCall…delved into my beloved Paul Fussel’s POETIC METER & POETIC FORM for the zillionth time…


Here’s what I discovered.
There’s split-line prose in a great deal of poetry. And LOTS of it in verse novels. Because, to build an entire novel, you may want the reader to be able to hold onto plot, syntax.  That requires the incorporation of prose elements. THE ART LIES IN…
It’s funny. I think of myself as both a POET and NOT-A-POET. I do not know whether this is because I am afraid to commit; because I’m really not sure; because I fear I won’t be fully accepted by either more definitive poets or more traditional novelists; or because I am happy in this nether-space called VERSE NOVELIST—it’s where I sing.

I've been avoiding Pinterest for years. I just couldn't handle any more social media distractions commitments. Then I read this MASHABLE ARTICLE, did some research, and decided to take a swing at "P."

I have three boards: One for THE SOUND OF LETTING GO (images that relate to the novel, including some of my own research photos); one for TSoLG fantasy casting; and a FAVORITE AUTHORS FAN BOARD in which I shamelessly fangirl book stuff.

Email ThisBlogThis!Share to TwitterShare to FacebookShare to Pinterest
Labels: Pinterest; THE SOUND OF LETTING GO; social media, YA Literature

Have I mentioned that I don’t write YA? 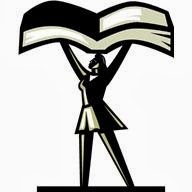 I write novels. Why do the protagonists tend to be teenagers? I really don’t know. I sometimes wish I could write humorous or action-packed middle-grade stuff like the amazing Barbara Park’s JUNIE B. JONES series or Mary Pope Osborne’s MAGIC TREEHOUSE. I can’t get enough of the gorgeous art of folks like Wendy Wahman and Paul Schmid. Heck, I kind of wish I’d been born Agatha Christie or Arthur Conan Doyle if you really want the truth. But I can’t. I don’t. I wasn’t.

Actually, I’m still doing all of that. And I’m learning through the medium that, right now, frees my voice and lets me dive deep (albeit sometimes fearfully) into memory, curiosity and hope.


So, no, I don’t write "YA." I write the books I can write in the strongest, most expressive way I can. And I honestly hope that curious people of all ages will read them.
Posted by Stasia at 4:06 AM 0 comments

Happy Book Birthday to THE VOW by Jessica Martinez 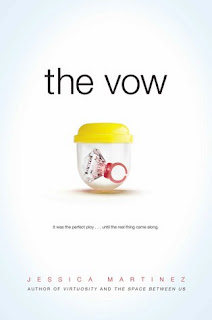 Jessica is a wonderfully talented writer and an amazing person. I had the pleasure of getting to know her when we presented together at Stages on Pages book tour stops. Her third YA novel, THE VOW, pubs today. After adoring her debut novel, VIRTUOSITY (my review here), I cannot wait to read this one! For more about Jessica, you can also visit her lovely website here.

Here's the LINK to the page at the YALSA site.
If you want to enjoy the fun via Facebook, click HERE.
Now, about this year's tag line, SEEK THE UNKNOWN...what does that mean to me in terms of novels? What books would I put on a reading list for this week? Some titles old, and some titles new...

Death versus life, and the internal mysteries of oneself.

Book-wise, what does THE UNKNOWN mean to you?
Posted by Stasia at 4:06 AM 0 comments

The difference between a great idea and a NOVEL

I’ve discovered that I have this time-consuming habit of being trapped between two stories and struggling (sometimes for months) to figure out which one is the beginning of the actual book I should be writing. It’s not pretty. I wish my brain worked IN SOME OTHER WAY. But it doesn’t. Maybe it can’t. All I can say at this point is that I’ve begun to learn how to listen to the warring factions of my creative brain and I have realized something. 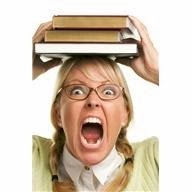 THERE IS A DIFFERENCE BETWEEN A GREAT CHARACTER OR CONCEPT and the START OF A NOVEL. At the beginning, they may feel the same but they are NOT.
When it’s just a flashy idea, it can start with some cool lines, maybe the vision of a character or a great WHAT IF notion. However, as time progresses, you feel resistance. Maybe you’re wrestling with form or point-of-view. Maybe the plot feels overworked or you dread the thought of the research you’ll have to do to make it feel real. Time passes and the word count goes up and then DOWN and then up and then DOWN AGAIN. You WANT to see the book through but somewhere in your gut is this sense of dread each time you face the computer.


When it’s a BOOK, maybe it starts with a great scene or the voice of an interesting character, but then, as you mull and write and eat a bunch of junk food, the story begins to wash over you. Driving carpool, you suddenly realize that the supporting character has a complex relationship with his dad and older brother. Putting on your mascara, you see how to resolve a challenging plot issue by changing the WHO of an action. The story structure feels like it’s settling into place. The “AND THEN WHAT HAPPENS” strategy IS WORKING! It is still as grueling, sometimes requiring discipline you’re not sure you’ve got but you know that THE STORY IS THERE.
Sometimes, you actually like the IDEA better than the BOOK for a while. Or it’s just hard to abandon the curious character you’ve been writing about, even if s/he is going nowhere emotionally, or plot-wise.


HAVE COURAGE. Close the file. Write THE BOOK!
Posted by Stasia at 4:06 AM 0 comments

Some thoughts about Miley Cyrus

Swinging naked on a wrecking ball? "Twerking" (whatever) up against Robin Thicke? People are rolling their eyes, saying Miley is embarrassing herself.

Honestly? I rolled my eyes when it was reported the kid was engaged at the ripe old age of nineteen. Rolled 'em again when I caught wind of her parents on-again, off-again divorce. Rolled 'em a little way back when I saw her dad playing a role on her Disney show. Ew. 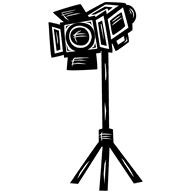 The other day, my sixteen-year-old son was playing a new Miley tune. I mentioned she might be losing her mind and he said that he saw her as still trying to break free from her "Disney brand" childhood. I was about to argue back when I realized that maybe I, like my kid, should cut her some slack because growing up in the spotlight seems to be super-hard.

So...maybe we should just cross our fingers and realize that, if she weren't famous, Miley Cyrus might still be a rebel child. Maybe the answer isn't to keep bashing her but to hope that IF, under all the ridiculous, "Girls Gone Wild" acting up she's done before the cameras, she's got a real problem with alcohol or drugs or depression, there is someone in her life who cares more about her than her money or her fame and isn't afraid to offer her the help she may need.

Want some great fiction to go with these ramblings? Here are two cool YA titles (one available, one coming in 2014) that deal with young celebrities trying to figure out life and love...

THIS IS WHAT HAPPY LOOKS LIKE by Jennifer E. Smith (Poppy/Little, Brown 2013)

If fate sent you an email, would you answer?

When teenage movie star Graham Larkin accidentally sends small town girl Ellie O'Neill an email about his pet pig, the two seventeen-year-olds strike up a witty and unforgettable correspondence, discussing everything under the sun, except for their names or backgrounds.

Then Graham finds out that Ellie's Maine hometown is the perfect location for his latest film, and he decides to take their relationship from online to in-person. But can a star as famous as Graham really start a relationship with an ordinary girl like Ellie? And why does Ellie want to avoid the media's spotlight at all costs?  (Summary from Amazon)
NOT IN THE SCRIPT by Amy Finnegan (Bloomsbury, coming 2014)

Millions of people witnessed Emma Taylor’s first kiss—a single kiss that needed twelve takes and four camera angles to get right. After spending nearly all of her teen years performing on cue, Emma wonders how much of her own life is even real anymore. But her new co-star, Jake Elliott, couldn’t care less... about how many scenes he has to fake his way through; he needs the money. Toss in a reckless heartthrob, desperate for a comeback, and a resident diva who may or may not be as evil as she seems, and the production of Coyote Hills heats up in unexpected—and romantic—ways.

Along with offering front row seats to the real life drama that often unfolds within the entertainment industry, NOT IN THE SCRIPT is a story about two not-so-typical teens who are searching for themselves, and just happen to find each other. (Summary from Amy's fb author page)
Posted by Stasia at 4:06 AM 3 comments

What's THE SOUND OF LETTING GO about?

Read more about it at...Amazon...Goodreads (though, aren't they the same thing now?)...or (occasionally) on my FB author page.

Email ThisBlogThis!Share to TwitterShare to FacebookShare to Pinterest
Labels: summarizing, THE SOUND OF LETTING GO, what's your new book about

Where I'm Not (but you should be)

I was all signed up and ready to go but family stuff got in the way. I am heartsick to be missing this because not only do I love Wordstock, but I also love the people who make it happen--the most amazing, passionate talented group of bookworms you will ever meet.

So, uh, if you're anywhere in driving distance of Portland, OR, go meet them and tell 'em I'm missing the City of Roses like crazy right now!
Posted by Stasia at 4:06 PM 0 comments