Where can you find me sandwiched between Laurie Halse Anderson and Andrew Smith (sadly, not at BEA)? On the Sullivan County Library System Mock Printz Award List. I'm not gonna lie. For writers of young adult fiction--particularly those who have struggled in the trenches for years, read and loved so many prize winners, and know what PRINTZ means in the kidlit community--even having your book mentioned in the same PARAGRAPH as the words PRINTZ AWARD fulfills a little fantasy. So I guess today counts as a teeny-tiny fantasy fulfillment day. 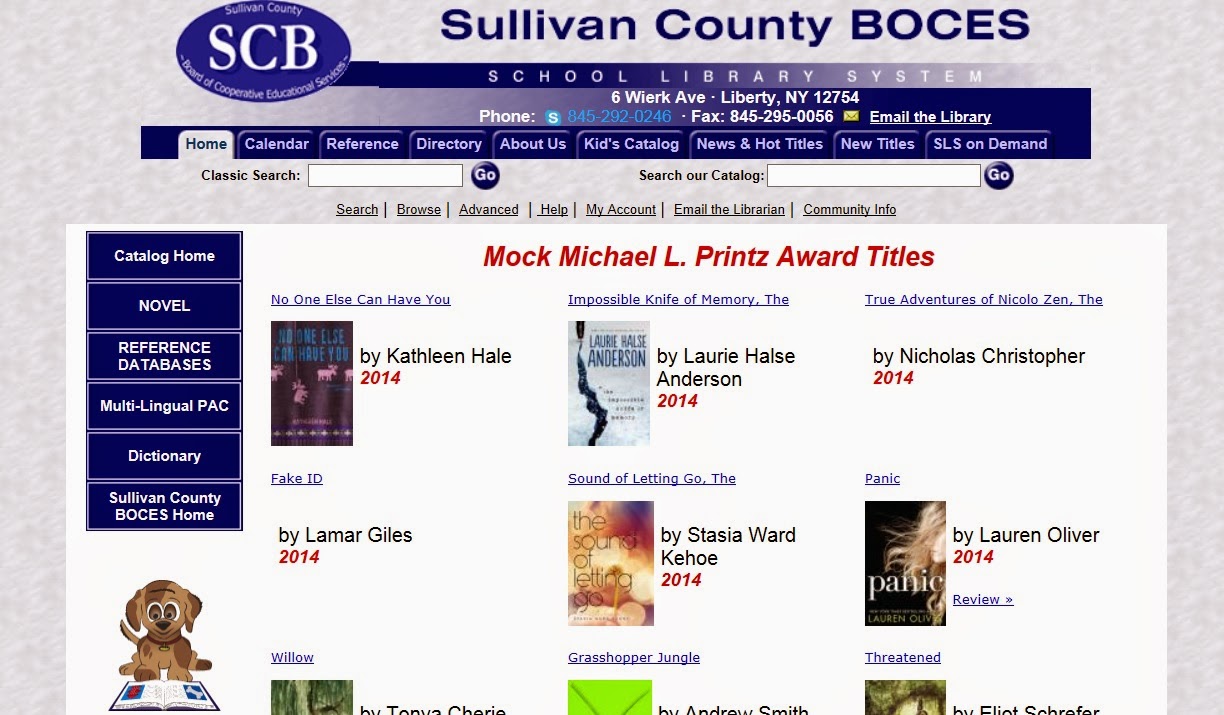 Now back to the dark, sticky, leech-infested mire of my current w-i-p. Hope you're writing today.
Posted by Stasia at 1:51 PM 1 comments

THE FINAL SESSION of my current WRITERS WORKSHOP SERIES (free & open to the public)
will be held this Saturday, MAY 24, from 11 AM - 1 PM

Whether or not you have attended previous sessions, you are welcome to attend. Classes are open to writers ages 13 to 103! Bring a pencil & paper!

PS Seriously, I know it's Memorial Day Weekend but how many BBQ's do you need to attend? Come and write!
Posted by Stasia at 9:36 AM 1 comments

AN EXIT STRATEGY FOR ADOLESCENCE

On a recent road trip with my husband and two teenagers, I brought along the audio book of Tina Fey’s Bossypants. The first half was fantastic: insightfully funny, forthright, loving toward the father, theater geeks and other people who shaped Fey’s suburban Pennsylvania teenhood. My husband and I laughed a lot and ruefully “oh yeah-ed” almost as much.  Somewhere in the middle of the book, however, something changed. Fey was still her intelligent, witty self but, as the book eased from high school and its affiliate, Saturday Night Live, into Thirty Rock and the Sarah Palin imitation season, the reading began to feel a touch shrill, the observations faintly defensive.
I admire Tina Fey’s comedy and, frankly, her whole persona. I didn’t want to see the insecure and cranky side of her that periodically emerged in the final chapters of her memoir.  “I’m disappointed,” I said uncomfortably to my husband. “My idol has clay feet.”
“Nah,” replied this man who has never written so much as a short story and reads only non-fiction (plus my books, sort of). I should also add that he finds Tina Fey totally hot. “She just doesn’t have perspective on the recent stuff.”
And there it was: the answer I’d been seeking about why I write Young Adult Fiction. Why so many people are writing YA. Why so many people love reading YA. It isn’t the oft-reference “time of discovery” or “building identity” or “helping kids get through stuff” mumbo-jumbo that we YA authors mutter desperately when called out on this question. It’s that we have actual perspective on memories of our teen years. We have emerged (more or less successfully) from that hideous celebrity-imitating haircut and humiliating no-date-to-prom epoch and can now turn back and write something intelligent about it. I write stories inspired by things I want to say to my teens when they’re about to do something unwise but will be infuriated if I try to share insights from my own experience. Is there a nice way to put this? My teens inspire me!
As a twenty-something writer, I remember having pride in my ability to turn a phrase but feeling trapped by the sensation that I had nothing of value to actually say. I had craft but no voice. It took the birth of four babies before I finally found myself. I hope that’s not the case for everyone or the world is going to have a serious population problem because, let’s admit, this planet is also rife with people who aspire to one day write the Great American Novel.  But I digress.
What is perspective? It is being able to take a look at a situation from outside your own point-of-view and get a grip on yourself. Even if your novel is written in first-person, present-tense, as is trendy in today’s YA, you, as author, can see the perspectives of the boyfriend, the mom, the obnoxious soccer coach and encouraging teacher. You can let the teen protagonist react in character while still offering readers a rounder view and a conclusion that offers some sort of insight or hopeful forward-moving suggestion.  As a writer, stumbling around the middle of a manuscript with that icky feeling that it will never be a book, having a true understanding of your characters is a lifeline. It is also interesting to note here that many writers set novels in towns like those they grew up in—not towns they came to as adults. Hmmm. Perspective again? Yes. Writers feel confident writing about things they can see clearly enough to describe.
Who likes to read books with perspective?  Well, teens because of the, you know, earlier “discovery” reasons but also because, in the books, the protagonists figure things out in ways they can’t. It’s not relatabiliy that teen readers are looking for, but exit strategies—reassurance that there is a way to see through that angsty, hormonal fog to a solution, even if they themselves still haven’t found the right lenses. Adults are likely reading about a perspective they have discovered and can delight in cheering for these teens who’ve sorted things out. Plus, it’s lovely to recall the intense heat of crushes or the drugless high of winning a big game artfully worded and conveniently on one's Kindle.
Yes, I am generalizing. Yes, there are phenoms like Divergent author Veronica Roth, who seemed to have been born with more perspective than others will gain in a lifetime and who can write best-sellers in their twenties. In the same vein there are prodigies in all artistic and scientific pursuits.  Think Shirley Temple, Mozart, Pascal, Piaget. But I think most of us come to a sense of self, a world view, much later than we care to admit. Stir in some reasonable writing skills and you get yourself a middle-aged debut novelist in the YA category. (see a picture of me)
Truth be told, I’d like to write in more genres, including adult fiction. I’ll probably never try a picture book since I honestly don’t understand how anyone has the maturity to construct truly great one (how do you do it, Kevin Henkes?).  But, given the pace of my maturation thus far, I suspect I won’t have perspective on being forty-something until I’m close to death, when the goal of writing the Great American Novel may be trumped by playing card games with grandchildren, filling prescriptions, or other currently unimaginable activities.
So, for today, I shall return to my YA work-in-progress, grateful for what I think I do know—for my shard of perspective on this scary, evolutionary thing we call life on Earth.

As they have done every spring for close to a century, the folks at the Children's Book Council celebrates the genre with a gorgeous poster and amazing roster of events. Click here to learn more and look for CBW programs in your community. 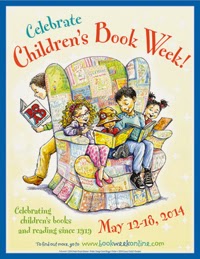 In which I rant about FEMINISM

As I was busily procrastinating this afternoon, I happened upon a Twitter slam of Shailene Woodley. The Tweetosphere was mad about her claims in TIME that she is "not a feminist" and the fact that she generally sounded kind of like a moron. Also that as a "role model for teen girls," she ought not to sound so stupid.

Well, folks, according to Wikipedia, our adorable Shailene at 22, "attended" (does not say she graduated) Simi Valley High School, started modeling at the age of four and, in her teens, played a knocked-up teenager on a popular but achingly poorly written Family Channel television series (the script of which may have been her most consistent reading matter for those years).

I don't have a Wikipedia entry but I'll tell you now that my two eldest sons are 19 and 17, not much younger than Shailene herself and they are, each in his own inimitable way, naive, pompous, self-righteous and judgmental from time to time. They are also loving, hopeful and fans of some of the worst, stupidest movies you will ever see. And, good or bad, the reasons they choose things are hilarious. They've both watched THE NOTEBOOK because they thought it'd help them get girls to kiss them. They read Twilight for the same reason. These are kids who get As in school. One is in college, the other is taking two honors and two AP courses in high school right now. But, they, even with their stable family life and (possibly) superior education, are fit to be ROLE MODELS for NOBODY!

So, yeah, I get it, Shailene came off as a dumb bunny, anti-feminist in TIME. But she's 22 and, despite navigating an impressive career trajectory, what we SHOULD BE TELLING OUR DAUGHTERS (and sons) is this:

Celebrities, athletes and (some? many?) politicians
SHOULD NOT BE LOOKED UP TO AS ROLE MODELS.
These are people whose LIFE GOAL is FAME and/or POWER.
They live strange, atypical existences surrounded by people whose own livelihoods depend on flattering and agreeing with them.

Choose better role models than the people you see on television.
Even if they are pretty, buff or wearing a well-cut suit. Even if they act in a movie version of a book by John Green. For that matter, he's a better role model (even if I, as a midlist writer, am wildly jealous of his success) (and even if he is a dude--it's not like he chose to be born with that Y chromosome)!

I say, cheers to Shailene for trying and SOMEBODY GET THAT GIRL SOME BOOKS (along with more education and life experience in general).

PS: With respect to the term FEMINISM itself, I'm not even gonna GO there because whatever I say will certainly get me in Twitter trouble. However, I believe in dignity and equality for ALL people regardless of race, gender, sexual preference and unfortunate quotes in Time magazine.

Experiment with language, form, voice as much as prose novelists do.

Take risks and avoid letting anyone trap you in critical “boxes”! 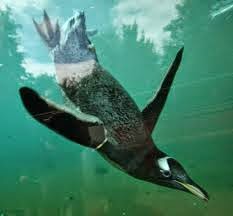 To paraphrase T. S. Eliot, "April was the craziest month..."
So many events to celebrate, so many books to read and, thankfully, a nice pile of freelance work to pay the bills.  What got lost? My fiction-writing time. So, I'm going under the radar and offline for the next week to finish a revision. I enjoy blogging, tweeting, etc., so I imagine I'll be experiencing some withdrawal--might have a relapse or two--but I am determined to get this revision done. Here's to a productive MAY for everyone!