I've been a Barbara Dee fan pretty much forever. From SOLVING ZOE to TRAUMA QUEEN, I adore the way she captures that middle grade girl vibe. So, I am thrilled to be celebrating the arrival of her latest... 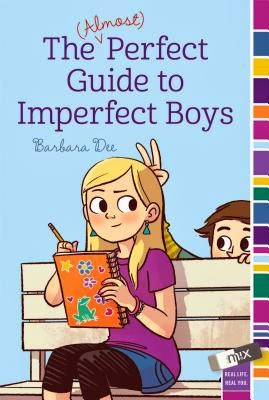 Do you have a tweenage girl in your world? Then you'll definitely want to order your copy now!
Posted by Stasia at 9:06 AM 0 comments

Banned Books Week celebrates "the freedom to read" but also, for me as a writer, it celebrates the freedom to speak, to communicate, to lift up your voice. When a book is banned, it means the writer of that book is diminished--his or her voice is judged by others as a voice that should not be heard. This thought makes me feel frustrated, angry and simply saddened, not just for those whose opinions are devalued but by those who appoint themselves judge and jury of ideas and think that they are somehow winning.

Why do those who ban CAPTAIN UNDERPANTS make me both sigh and laugh? As the mother of three teenagers, I am quite certain that things that are banned hold a certain tantalizing appeal for young adults (read THE BOOK THIEF and you'll see what I mean). I have long stopped admiring myself for parenting my eldest because it turns out he was just an easy kid. When I said "we don't go to R-rated movies," he was fine with it so WE didn't.  When I told my next son "we don't..." he nodded, smiled and snuck into one with his friends. So, yeah.

What about school? Well, if your kids watch the bizarre weirdness of Dora the Explorer and Thomas the Tank Engine (that sh** it creepy), I really think they can handle THE HUNGER GAMES and LOOKING FOR ALASKA. And if they don't find those titles in their school library, be assured teens are more than capable of getting their hands on a copy of a book--it's even easier than getting beer for the party they're going to when they tell you they're spending Friday night at their church youth group.

So, here's my suggestion for what to to do instead of being a book-banning bully:

TEACH YOUR CHILDREN THE DIFFERENCE BETWEEN FACT AND FICTION.

TEACH YOUR CHILDREN TO STAND UP FOR WHAT THEY BELIEVE IS RIGHT AND GOOD.

TALK TO YOUR CHILDREN ABOUT WHAT YOU READ (including in the newspaper which we might all agree is useful reading and is loaded with horrible stories about radical militants and diseases and tragedies and advertisements for all kinds of materialistic things we shouldn't covet) and ASK THEM ABOUT WHAT THEY ARE READING to MODEL THE VALUE OF THOUGHTFUL CONSIDERATION OF MULTIPLE VIEWPOINTS.

And then let 'em read whatever they want to read.

Despite my good intentions, writing has been on the back burner this month as I've worked to acclimate my youngest to his new school, mail everything my eldest forgot to take with him to college, encourage my high school senior as he wrestles with the Common App, and drive my busy eighth-grader all over the east side.

I tell myself these are the reasons I haven't been writing but the truth is more complicated. I've grown somehow frightened of my manuscript. I am uncertain whether I have the strength and skill to fix the pacing problem I see or finish all the research required to get certain elements right. When I think of the careful reread I need to give the piece--and the outline I should probably make at this juncture--I yearn to both sleep and cry.

Lately, though, there have been moments--mostly while I am driving carpools or washing my hair--when I feel that connection to my characters somehow re-electrifying. I've started scribbling notes again, looking for the courage I need instead of just hiding behind my to-do list of laundry and shopping.

I feel like this odd, fallow period may yet yield something worth putting on the page. At least, I hope it will.

Email ThisBlogThis!Share to TwitterShare to FacebookShare to Pinterest
Labels: writing

As of today, all four of my boys are back at school. I'm feeling rather queasy about my 8yo's classroom placement and nervous about getting my high school senior through the college application process. I'm mired in two manuscripts and trying to figure out a new fall writing routing (that leaves a little room for exercise)--fast!

On a bright note, over the last few weeks, I've done a bit of living. Visited New Hampshire where I kayaked on a beautiful lake and toured some serene gardens. Hit Seattle's Bumbershoot festival for the first time with my 13yo--it was awesome, especially Punchline Comedy and a live performance of The Moth radio hour. Went to the Evergreen State Fair in WA with hubs and the boys where, beyond the gut-punchingly delicious fair food and Ferris wheel traditions, the highlight for me was holding the MOST ADORABLE four-month-old bunny.

In fact, catching rays and getting with nature were two nice themes of late summer. Here's hoping they lead to some good words by the light of my keyboard this month!

What's up with your back-to-school routines?
Posted by Stasia at 11:35 AM 0 comments