Helen Landalf is a fellow western Washington writer, a dance teacher, and an all around amazing person. I am so excited to have her guest posting here today--the first audition story to debut here at my blog (moving some of the other audition stories over next year).  Make sure to check out Helen's debut novel, FLYAWAY, on sale December 20th! 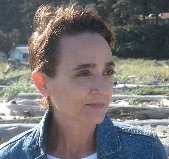 What a lot of people don't know about me is that before I became a writer, I was an actress. I starred in lots of shows at my high school, acted in community theatre in my hometown of San Diego, and even won a scholarship to study drama at San Diego State University. I dreamed of being a star, and that dream almost came true. The one thing that stopped me was my tooth.

See, I have this one pointy tooth at the front left side of my mouth that I've always called my fang. I was so self-conscious about it when I was younger that I developed a lopsided smile. It was this tooth which lost me a role and changed the course of my life.

When I was in my early 20s, I entered a contest called "Catch a Rising Star," hosted by the local TV station. As one of the finalists, I ended up with an agent, who sent me out on an audition for the lead female role in an independent movie being filmed at the prestigious American Film Institute in Los Angeles. It was the perfect part for me: a sweet small-town girl who wants to be a singer. I dressed in a skirt and heels and drove to L.A., where they had me read from the script and then sing a few bars of "You Light Up My Life." I wanted that part and I wanted it bad, so I opened my mouth wide and belted my heart out.

A few days later, my agent called to say that I'd come close but didn't get the part. What ultimately swayed the director's decision? My tooth. It didn't look good when I sang on camera. Naturally, I was devastated. My agent told me that if I seriously wanted a career in film, I needed to see a dentist and get that tooth capped. After many agonizing weeks of thought, I refused. I decided that if I had to change myself in order to make it as an actress, it wasn't what I truly wanted to do.

And so I embarked on the path of becoming a writer. And when my debut novel, FLYAWAY, releases in December, I can guarantee you that, fang or no fang, I'll be grinning from ear to ear.
Helen Landalf's debut YA novel, FLYAWAY, releases from Houghton Mifflin Harcourt this December. Visit her online at http://www.helenlandalf.com/.
Posted by Stasia at 4:06 AM

Very inspiring story. Congrats to Helen on her debut!