Getting Naked (Metaphorically) on the Blog

Recently, I have been engaged in a very cathartic (and occasionally curse-laden) email string with some awesomely wonderful wish-they-were-my-sisters writer friends in which I have confessed my growing urge to be "more myself" in the cyberverse. And by "myself," I mean, lifting the veil on the often dark writer me and the very cynical book-marketer me. Saying the stuff I usually reserve for rants to the hubs. (I first alluded to this topic online here.)  I even went so far as to write and then deleted a couple of rather earthy blog posts. Several friends admitted that they, too, have drafted very forthright blog entries which they may never post. 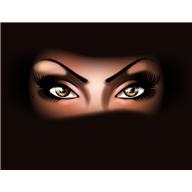 While, I am clearly still a chicken-heart in terms of being "me" on the internet, I will say that expectations for today's authors (especially new and debut) are that they will make a strong effort to help promote their work, especially online. You know, get yourself a blog, a twitter, a fb, a tumblr... build yourself an online "persona," maybe a "platform" (yeah--me either), and embark on a blog tour. I, frankly, love the internet (perhaps too much) and so none of this worried me. In fact, I started multiple websites, organized a group author tour, blogged, gave stuff away and on and on.  I learned a ton and wouldn't necesarily change what I did, but impact on sales...?

The thing is, we all know how many books are being published every week and pretty much every author is doing some variation of all this stuff. It's almost become static--elevator music. There's little data to show whether any of this stuff directly moves a significant number of "units" (aka books)--unless you're, er, already in the limelight via television celebrity or significant success in another industry. And everybody's working so hard to create this type of content while NOT WRITING ANY MORE BOOKS!!!

I truly love my writing community and want to build writers up. So my question for all of us is: How does one stand out admist all this virtual white noise? Are snark, cynicism and controversy the only styles that will engender blog hits (that, again, arguably don't sell books anyway)? Will we be reduced to Lindsay Lohans and forced to bare our, er, souls? Should we even try?
Posted by Stasia at 4:06 AM

All good points and questions, Stasia! The way I see it is if you can still keep up your writing, producing books, making deadlines while marketing and promoting, then do it. But if it takes away from your writing time then don't! The most important thing is writing a terrific story. You'll have nothing anyone will want to buy after all that marketing and promotion if you don't have a great story to sell!

I've got no answers.

(So, if you discover the right way...let me know!)

Great post! I am not a published author, but I see the pressure to build an online presence already just from querying and reading up on agents. I keep up with my blog as much as I can, but if it's a choice between the writing and the online stuff, I'm usually going to choose the writing. It also seems like the bigger an author gets, the more infrequent their presence online becomes. The blogs I keep up with have a unique voice and say interesting things. I aim for the same thing myself.

I don't know the answer. What I do know is I like you, whether we're in the blogosphere or the same room. :) Also, for what it's worth, I don't find myself drawn to blogs full of cynicism and controversy.