Why I Love Banned Books Week 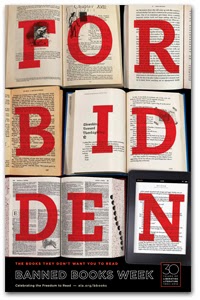 Because those lists are filled with books I have loved so,
you know, they're useful :)

Some of my must-reads on the banned list are LOOKING FOR ALASKA, THIRTEEN REASONS WHY, THE ABSOLUTELY TRUE DIARY OF A PART-TIME INDIAN and, a personal favorite CAPTAIN UNDERPANTS (I mean, really?). Head over to the Academy of American Poets longer list of banned books and you'll also find GRENDEL, JUNIE B. JONES (yep), A WRINKLE IN TIME, THE BRIDGE TO TERABITHIA and so many other examples of powerful, thought-provoking BOOKS PEOPLE SHOULD READ!

Even more telling than the titles to which people have chose to object are the REASONS they don't like the books--from homophobia to objection to a particular religious viewpoint to what seems to me to be nothing less than ignorant misinterpretation of what an author is trying to do.

I know authors who wear their "bans" like badges of pride and others who are deeply hurt at being misunderstood. I feel for both types. And I am NOT a fan of people who put other people on lists and those who elect themselves arbiters of their community's morals.

Pop on over to the BANNED BOOKS WEEK website and see if you agree.

I love Banned Books Week, too! It's great to bring awareness about how ridiculous it is to tell someone else what they can and can't read.

Some of my favorite banned books are To Kill a Mockingbird, Harry Potter, anything by Roald Dahl (especially James and the Giant Peach), anything by Judy Blume, and Where's Waldo! But really I've read a lot of the books that made the top 100 Banned list and they're all wonderful in various ways. People sure are missing out if they choose not to read them!