For the final writing-in-tandem in interview this month, I am delighted to welcome Newbery Honor winner (for HATTIE BIG SKY) Kirby Larson and New York Time's best-selling author Mary Nethery, co-authors of two award-winning picture books.
SWK: What made you decide to embark on your first joint writing project, TWO BOBBIES? 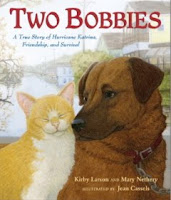 KIRBY: We'd both had long, dry spells in terms of publishing. I know I was awfully discouraged and beginning to wonder if the universe was telling me to get a job a Starbucks and hang up my writing dreams. Then I went to a local SCBWI meeting where a writer named Pamela Greenwood talked about her (positive) experiences working with a co-author. I thought collaborating might be the answer to ending my slump and I couldn't think of anyone else in the world I'd rather partner with than Mary. Thankfully, I caught her in a weak moment and she agreed! ;-)

MARY: When Kirby proposed we write together I remember feeling it was a decision that had already been made— like it was meant to be...Since we both write fiction, narrative non-fiction which also has a story arc sounded exciting and challenging, with the capacity to take us into untested waters. We chose inter-species friendships because we're both passionate animal lovers. We wanted and needed that passion to carry us through.

SWK: What was your process for writing together?

KIRBY: Because we didn't want to do anything that might hurt our friendship, we first spent some time talking about ground rules. Bottom line: we agreed that nothing would go into a book unless we were both okay with it....One of us--neither of us remembers which one--wrote a first draft of the opening and we were off. We'd each tackle a section, then send it to the other person...and every Friday we had a looooong phone chat to go over that week's work.

MARY: I think Two Bobbies was the perfect story for us to cut our teeth on because finding the arc for their story was such a demanding process...Our two very different writing styles were given the free rein they needed to work for us, to fuse into one style that reached beyond either of us. When we write together, we seem somehow to be able to flow as one and stretch beyond what either of us might achieve separately.

SWK: How do you think writing as a team affected working with your editor?

KIRBY: It was terrific to have Mary to bounce my reactions to editorial comments off of and it was great to present a unified front when we had a different take than the editor. I think our working well as a team inspired the whole crew that worked on the Bobbies -- including illustrator Jean Cassels, editor Emily Easton and all of the marketing folks -- to work as a team.

MARY: I think having two brains working on the story helped us to focus in like a laser on the decisions we'd made at each point along the way in writing the manuscript, and that certainty brought clarity during the editing process.

SWK: What was the best, worst, scariest or funniest moment in the co-writing process? 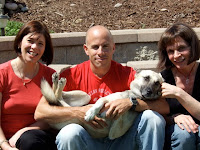 KIRBY: It was scary to fly ourselves to San Diego -- on our own dimes -- to introduce ourselves to Brian and Nubs in hopes they would let us tell their story...Best moments were meeting the Two Bobs and meeting Nubs, as well as being honored with the ASPCA Henry Bergh award for the Bobs and the Christopher Award for Nubs.

MARY: One of the high-flying moments of our work together was going after the story of Bobbi and Bob Cat! It was our first, we'd never gone after a true story before. This story had hit the national news and we passionately wanted to tell it...Every step along the way was a new experience and we just went for it, figuring things out together. Uncovering new material not disclosed to the public was exhilarating. Meeting Bobbi and Bob Cat for the first time was inspiring. Working with Kirby was over the moon!

SWK: Is there one particular aspect of the story, or of the writing process, that you feel was better because you wrote as a team?

KIRBY: Well, I feel the stories are better because of Mary's input, that's for sure. She has a gift for being able to see the story arc and worked her darnedest to keep me on track.

MARY: Kirby is such a gifted writer that she can write and propose multiple solutions on the fly, so to speak, which I can't do...She also has a real gift for interviewing people...It's this odd combination of so many differences and yet so many similarities that works so well for us!

SWK: Clearly you enjoy co-writing, as you've jointly written another great book, NUBS. How did you select this second topic and was it easier to write because you had already completed a book together? 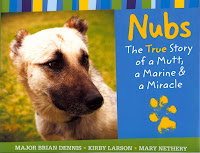 KIRBY: We do love writing together! And we wouldn't have had either of these books without Mary's sharp eye... she found the newspaper article that talked about Nubs and Brian. She had the firm belief that we would find a story tied to Iraq and we did; because the story focused on the power of love and was a story of hope, we knew it was an important one to tell. I wouldn't say Nubs was easier to write -- in fact, it was more complicated than the Bobs -- but Mary and I had our system down and that was a real blessing as we tackled the challenges writing Nubs presented.
MARY: The process of writing Two Bobbies and Nubs has made it easier for us to make decisions about future stories. We know what we want—we look for stories where the animal does something extraordinary that illuminates people's understanding of life and helps them to be kinder than they thought they could be.

SWK: What advice might you give to other writers considering a joint writing project?

KIRBY: Well, I can only say what has worked for me and that is to partner with someone you trust implicitly and admire tremendously and to find a story that you're excited about telling.

SWK: Okay, now for the game show questions! Kirby- You can invite any two authors, living or dead, to Mary's house for dinner. Who's on the guest list and what will be the amazing entree?

KIRBY: If it's at Mary's house, her husband will be cooking, something gourmet like grilled Ahi and roasted veggies but Mary will be in charge of dessert which will be outrageously chocolate with loads of frosting (I'll give her my share of the frosting because I don't like it). The authors I'd invite would be Meg Rosoff for Mary, because she loves her book How I Live Now and Flannery O'Connor for me.

SWK: Mary-You have two plane tickets to share with Kirby. What is her dream destination? What three books will you tuck into her suitcase?

MARY: Ooh là là! What a fun question! I think her dream destination would be Paris, us together doing Paris--all the shopping and eating and coffees and pastries!...But then I'd surprise her. Instead of getting on the plane for home, we'd go to East Africa, to Loisaba Wilderness Lodge, where we'd sleep outside in Star Beds under a moon-lit African sky listening to the sounds of the night... Then as a last stop, we'd stay at Giraffe Manor in Kenya so she could experience the Rothschild giraffes joining us at breakfast...I'd tuck these three books in her suitcase: The Cat Who Went to Paris by Peter Gethers; Bemelmans' Madeleine; and Out of Africa by Karen Blixon.

Thank you, Kirby and Mary, for taking the time to share such great insights and advice about writing-in-tandem!
Posted by Stasia at 10:40 AM

Thank you for interrupting my morning work with this great interview. I look forward to reading more books by Kirby and Mary. Oh, I had no idea Kirby was a fan of Flannery O'Connor. I would want to be at that dinner. :)

Mary and Kirby certainly have writing chemistry and a love for each other that shows in their work.

wow, great interview! thanks so much to all of you ladies for your time!

"When we write together, we seem somehow to be able to flow as one and stretch beyond what either of us might achieve separately." I know exactly what you mean, Mary. I have the same feeling writing with my co-author, Joan Holub. Such fun to read how you and Kirby work together!

Thanks for stopping by and sharing your thoughts, Michele, Natasha & Tahereh. And, Suzanne, it was terrific hearing your feedback on another co-author team's style! - Stasia