This has been a funny year for Santa Claus-ing.  My two oldest sons, 17 and 15, are at the point where the things they really want (to score a winning touchdown, get the lead in the school play, kiss girls (arrrrgggghhh)) can't be found in stores.  The five-year-old will find his much-wished for Hot Wheels and Legos under the tree.  But, our eleven-year-old is at that tricky in-between spot: no longer a "believer" but still kind of wishing for that Christmas magic. Some years, as a parent, you get to deliver. 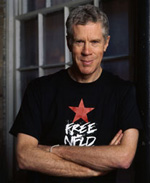 See, every Sunday, my 11-year-old listens to a Canadian radio show called The Vinyl Cafe hosted by the great storyteller Stuart McLean. He loves it.  He wants to BE Stuart McLean. Yep, my son's life's dream is to be a public radio storyteller.  About a year ago, he submitted a poem to Mr. McLean who kindly wrote an encouraging email reply (which I saved--this is important!).

At holiday time, Stuart tours Canada with a stage show just like the radio show: A bit of music but mostly a guy standing at a mic telling stories about family, pets, and small-town life.  It's poignant and wonderful and HE ONLY MAKES ONE U.S. STOP: Seattle. My husband bought three tickets.  When my son heard the ad on the radio, he immediately asked how many pairs of shoes he'd need to shine (that's how he earns his keep at our house!) to go to the show, he told him he was already going. His eyes lit up bright as a Christmas star.

﻿
﻿ December 13 was the big night.  We took our son our to the show. The theater was packed. My son laughed and sighed and clapped his palms red. But the best was yet to come. The week before, I'd dug through my emails and found the one from Stuart McLean. I wrote him, asking if he might meet my kid and he put us on the backstage list. After the show, a mystified son followed us not toward the exit but down to the stage, past two black-clad, important-looking security guys, up three flights of stairs to the dressing room.  Mr. McLean kindly remembered my son, greeting him with "here's my young poet friend." I've never seem my son's eyes so huge--he was barely able to speak.

It was the kind of night you can never repeat. The kind of magic for which you can only be grateful.  Yesterday, my son said to me, "I kind of don't need Christmas this year. For me, Christmas has already happened."

Enough said.
Posted by Stasia at 4:06 AM

Wow, what an amazing gift! He'll be talking about it decades from now.

Knowing the 11-year-old in question, I can totally picture the whole thing. How fab!

What a great story. I'm misty-eyed!

What an incredible story. Thanks for sharing! And I hope to see you again soon :)