As heard on NPR, fact & fiction, and a photo!

Last week, I had the pleasure of meeting Lisa & Laura Roecker, Miranda Kenneally and Janet Gurtler at SourceBooks' fantastic GET REAL tour stop at Third Place Books in Washington. Here we are with some other bookish types: 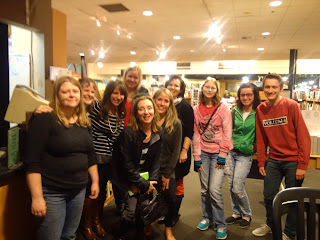 Driving home, I heard an NPR feature about "trackers" - people (often young, collegiate or intern types) who have spent months following political candidates, recording their every word to send back to "war rooms" run by various advocacy groups. There more people scan computer screens in search of errors, contradictions and foibles the candidates have made.  These discoveries become source material for stump speech zingers and media ads showing candidates taking and then reversing positions. Seems to me like thousands of hours, people, eyes staring at computer screens to make this election even more persnickety--acknowledging even less that candidates on both sides of the aisle are also human beings constantly in dire need of sleep and under an inhumane amount of scrutiny.

It's not that I feel all warm and fuzzy when candidates seem to change their policy tunes in response to the whims of their base constituencies. But as a person who every day calls one of her son's by another one's name and is (gasp) subject to changes of heart and changes of position, I wonder at this "tracker" model.

I recently read Cory Doctorow's PIRATE CINEMA, in which he posits that editing together footage from multiple previously made films to form a new narrative is original, is creativity, is art.  And I wonder, are trackers' clipped together soundbytes of politicians mispronouncing words or saying things that could be construed as contradictions "fact"? Or are they, like the works of Doctorow's protagonist Cecil B DeVil, "art" too?

PS: If you're old enough, make sure you exercise the amazing privilege you have to VOTE tomorrow. And, if you've already mailed in your ballot, HURRAH FOR YOU!!!!
Posted by Stasia at 2:45 PM